Home/Uncategorized/Penuma Implant is coming to Washington DC
Previous Next

Penuma® is the first FDA cleared male enhancement cosmetic procedure and will be available soon in the Greater Washington DC region by Dr. Tajkarimi.

Developed by world-renowned urologists, Penuma has been successfully implanted in thousands of men since 2004.

Although fat injections and tissue enhancers have been used by some plastic surgeons in the past to augment the girth of the penis, in many instances, the results have been short-lived or not cosmetically pleasing.

The average erect penis is about five inches long and four and a half inches in circumference, according to a 1996 Journal of Urology study. Yet by one estimate, nearly half of all men think their packages are smaller than average. Although bigger is not necessarily better, many men have legitimate reasons to seek help, such as testosterone deficiency during puberty, obesity, hormonal deficiencies, genetics, etc. Whatever the cause, it’s hardly news that men obsess about the relative size of their members and what that size says about them, physically but also socially. 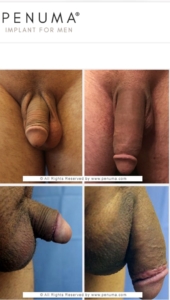 Beyond its sexual function, the penis plays an undeniable function in the confidence of men in all cultures and races. The same way women seek plastic surgery to enhance their breast size and shape, and other cosmetic work, men have sought ways to improve their bedroom appeal.

The effects of the procedure can be immediate. The flaccid penis can appear longer as the implant causes the penis to hang more prominently. Penile girth can also be significantly enlarged. Past averages have shown increases of approximately one and a half inches in girth though this is not a guarantee of your results. Patience is required during the healing process – for example, no sex for at least six to eight weeks (though individual healing progression and results may vary) – but once healed, the enhancement can be essentially permanent and basically undetectable.

When implanted, Penuma can be natural looking, reversible, and does not interfere with penile function. It does not make erections or sensations better or worse. It is not a treatment for erectile dysfunction, but Penuma is one of the most effective ways to improve the overall look of the penis.

Long-term safety data examining results for hundreds of patients show that the Penuma penile implant has a low rate of complications with the most common adverse events such as seroma, scar formation, infection, and temporary loss of sensitivity. Potential risks, complications, benefits, and alternatives will be discussed in detail in advance of the procedure.

About the Author: Kambiz Tajkarimi

Stay updated with all latest updates,upcoming events & much more.
*Terms and conditions apply.

Powered by Convert Plus
VIRTUAL VISIT
Go to Top